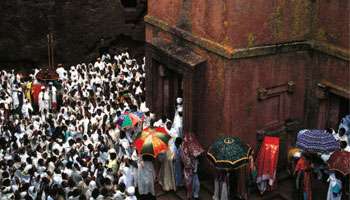 The long-awaited monograph richly documented and illustrated finally allows to learn more about the mysteries of the city of Lalibela , Ethiopia .

Declared a World Heritage Site since 1978 , the monastic city of Lalibela ( Ethiopia ), formerly known as Roha , is one of the main holy places of Orthodox Christians in the country . Famous for its numerous monolithic churches carved into the rock in the early thirteenth century, more than 2,500 meters, the new Jerusalem desired by the king Lalibala (the original spelling of his name) is today also , a place of passage for any visitor wishing to scrutinize closer the soul of Ethiopia.

This magical and serene place, a true lost in the mountains of the island Amhara region , a long-awaited monograph French able to unveil some of its mysteries. This is done with Lalibela , the capital of Ethiopia monolith art, a study of nearly 400 pages ( Lalibela , the capital of Ethiopia monolith art ) signed by anthropologist Jacques Mercier and Claude Lepage specialist Christian arts of East. The dense and highly documented analysis clarifies many points on the time of construction of the site, how it grew and became known abroad , its use over the centuries , its hidden treasures , artists contributed to its greatness and, finally, the current trend of churches. An essential book, then, which emphasizes timely religious diversity of Africa, its arts and heritage wealth and its contribution to the history of mankind (Jeune Afrique).