The rock-hewn churches of Lalibela 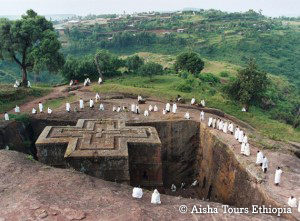 The rock-hewn churches of Lalibela (642 kilometres from Addis Ababa) are internationally-renowned and are sometimes called the “Eighth Wonder of the World”.

Physically prised from the rock in which they stand, these monolithic churches were originally thought to have been built in the 12th century during the reign of King Lalibela, but some have been dated back to the 10th century. There are eleven churches, assembled in three groupings.

The Northern Group : Bete Medhane Alem, home to the Lalibela Cross and believed to be the largest monolithic church in the world. It is linked to Bete Maryam (possibly the oldest of the churches), Bete Golgotha (known for its arts and said to contain the tomb of King Lalibela), the Selassie Chapel and the Tomb of Adam.
The Western Group : Bete Giyorgis, said to be the most finely executed and best preserved church.
The Eastern Group : Bete Amanuel , Bete Merkorios, Bete Abba Libanos and Bete Gabriel-Rufael. Further a field lie the monastery of Ashetan Maryam and Yimrehane Kristos church.

Trekking in the Semien Mountains and historic route of Ethiopia