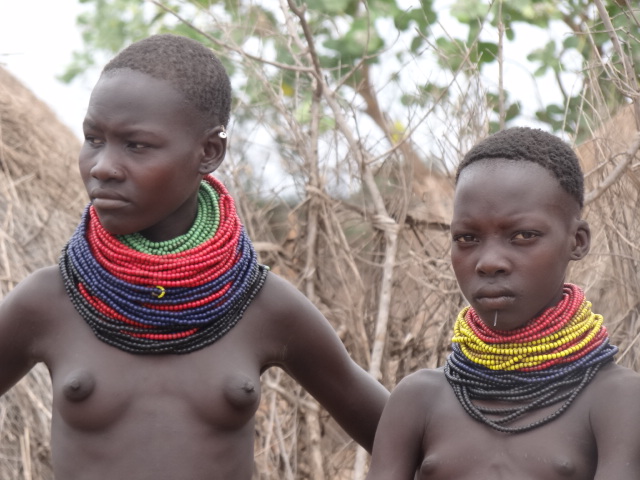 Nyangatom , ethnic minority ( 15,000 representatives ) of Karimojong group , live in the extreme south- western Ethiopia , on the borders of Sudan and Kenya , in a particularly inhospitable region Triangle Ilemi . This border area was conquered by Emperor Menelik in 1899 but remained purely nominal Amhara occupation and region was not colonized .

Nyangatom have always been in conflict with their neighbors and they are among the most feared of the Omo Valley Warriors . In the 70s , they were practically decimated by Dassanech . But in 1980 , benefiting in some way , the civil war in Sudan , they could equip themselves with guns and the tide turned .

Nyangatom are related to Toposa , their only neighbors with whom they are not in conflict. Their language is a Nilotic languages ​​is belonging to Teso – Turkana group. Their neighbors call them by their derogatory name , Bume , meaning ” those who feel bad.” Themselves prefer to call them by their nom de guerre Nyang -atom , that is to say ” yellow guns ” rather than by their former nickname ” elephant -eaters ” Nyam- etom .

The originality of the Nyangatom culture is their way of classifying individuals into categories according to the elements of their status and recognize as Elephant and Ostrich although it does not exist but only a patronymic surname at birth and territorial belonging (eg the Storks , flamingos, Ibis ) guaranteeing resource access rights. Without centralized political system or report dominant – dominated with their neighbors, but sensitive charismatic power , they are not clan or lineage but generational division. Generation is divided into age groups and these in local groups.

Nyangatom harvest sorghum , maize , beans, collect honey , dry the fish they catch , the time to live in a camp near ephemeral pastoral mobile and hostile neighbors more often , playing their pastures and livestock. In the year , as measured by the lunar and starting with the first rains, floods alternate with human concentration and drought , causing dispersion of groups. For wealth, in this culture of poverty but nevertheless know-how , the man his flock , his wives and children, but also his body ornaments , the headrest and its weapons.

At his death , the former has its place in the paddock zebu under a mound of dried dung and mourners whiten body sorghum flour . As for Evil Dead , they are left to the vultures and hyenas.